This notebook is part of the series on preparing data for Neural Network regression with EpyNN.

It deals with a real world problem and therefore will focus on the problem itself, rather than basics that were reviewed along with the preparation of the following dummy dataset:

Detection of fake art is a challenge for a market reportedly costing more than 60 billion USD per year. Indeed, the price of an art piece is directly linked to its author and the more famous one author is, the more falsifications are to be expected. You might like to visit Deep learning approaches to pattern extraction and recognition in paintings and drawings for an overview of deep learning methods used to assign one painting to the corresponding author.

Herein, we are going to work with audio art or music. More specifically, we will prepare one True and False dataset from audio .wav files that may have been produced by one author or another. The goal will be to train a model able to predict, for one piece of music, which of the True or False authors is playing.

Audio files can contain music of any duration. Moreover, we may just have a single audio file for each of the True and False authors. Among other reasons, we therefore need to make clips to have more than one training example per author.

Note the tarfile which is a Python built-in standard library and the first choice to deal with .tar archives and related.

Note the import of wavfile from scipy.io. Scipy is a “Python-based ecosystem of open-source software for mathematics, science, and engineering” while the wavfile module provides easy-to-use read/write functions for audio .wav files.

Simple function to download data from the cloud as .tar archive. Once uncompressed, it yields a data/ directory containing subdirectories data/true and data/false themselves containing audio .wav files.

Retrieve the data as follows.

Walk through the uncompressed archive directory to see what it actually contains.

These audio .wav files are instrumental guitar music. Credits to:

By clipping music we mean make chunks of it. We need a TIME for one clip, which defaults to 1 second.

Also, we will resample the data, because the .wav file has sampling rate of 44100 Hz which means 44100 data points per second. This is a lot when considering that we will later retrieve many clips of one second. Indeed, while one .wav file weights only a few MB, it weights much more when embedded into NumPy arrays. To prevent overloading the RAM, we need to reduce the number of data points per clip. This SAMPLING_RATE defaults to 10000 Hz and as a consequence we will lose most of the patterns with frequencies is higher than 5000 Hz (See Nyquist rate for more).

Fortunately, the highest pitch a guitar can play is lower than 5000 Hz (See Range (music) for more). Although harmonics can go beyond this limit, we can expect to not lose the patterns or signatures for each of the True and False authors.

For the sake of rigor, note that when saying resampling - downsampling - we mean decimation instead. See Downsampling (signal processing) for more details. In brief, a complete scheme for downsampling requires applying a lowpass filter to eliminate high frequencies and then proceeding with the decimation process. In the context of this example the impact of not applying a low pass filter is limited, and so we choose to only apply decimation for the sake of simplicity.

In addition to clipping and resampling, we have done the following signal normalization within [0, 1]: Audio files 16-bits encoded are lists of integers ranging from -32768 , +32767 for a total of 2^16 bins. We need to normalize within [0, 1] for one technical reason: such high values are likely to generate floating point errors when passed through exponential functions, among others.

Normalization was achieved on a per-file basis, because we assume that sound level extrema may be different from one recording to the other or from one author to the other. Therefore, the minimum and maximum sound level from one file to the NumPy array will be equal to zero and one, respectively, after normalization. In addition to preventing floating point errors, this helps to make further network training faster because the network does not need to perform such normalization by itself.

The last thing we have done is signal re-digitalization using a 4-bits encoder over 16 bins. This is because we make the choice to later one-hot encode these data. When doing the latter, we lose information over signal amplitude and we focus on patterns in signal.

See One-hot encoding of string features for details about the process. Note that while one-hot encoding is mandatory when dealing with string input data, it can also be done with digitized numerical data as is the case here.

We can now see how it looks with different settings for the same clip length of 0.1s: 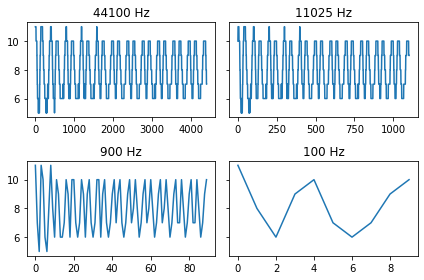 Along with decreasing the sampling rate, we observe that patterns corresponding to higher frequencies are eliminated.

Below is a function we use to prepare the labeled dataset. 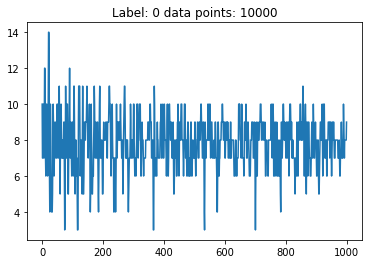 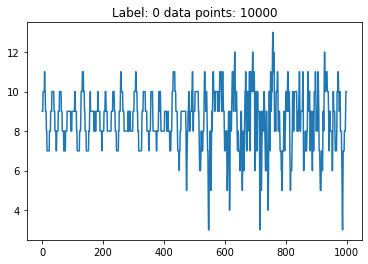 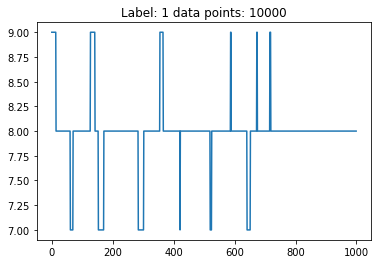 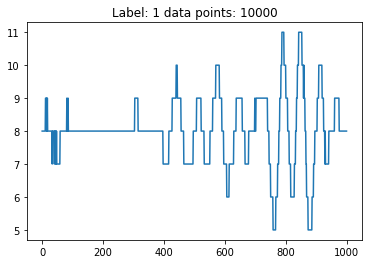 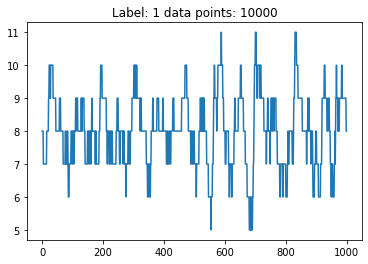 We are ready to proceed with the training of a network based on these data.

The function prepare_dataset() presented herein is used in the following live examples: